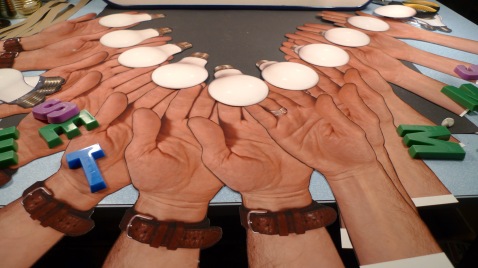 As a change of project I’m going to be posting a couple of *brand new* one-minute-or-under videos on my social media accounts (FB and Instagram) each week for the rest of June and July. So that’ll eventually be a dozen all told.
They’re mostly animations, but not exclusively. They’re not all shot on video either so, if you prefer live action and Super 8, then there will be moments of relief… The overarching ‘concept’ is explained in the v. brief (39 secs) teaser trailer which kicks the series off.

I think of them as being like that thin bonus biscuit served with your coffee: unexpected, but definitely manageable. And free. 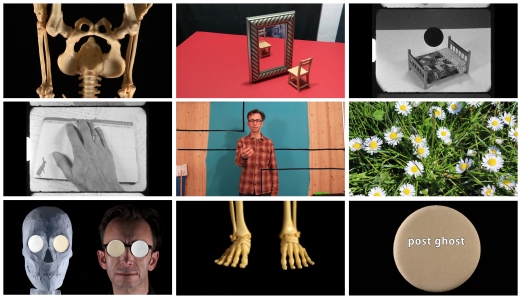 Yesterday I finished my third film of 2019: ‘My summer with Raúl’ (12.5 mins, HD video). Today I stuck some stills from it in a grid pattern. I know it’s not quantity that counts. Not usually. But maybe it does sometimes? Like on sunny days in late September?

This summer I set out to make a fact-based short film; that doesn’t sound like much of a deal – there are millions of documentaries out there, after all – but that wasn’t what I was aiming for. I wanted to attempt a newsletter: something domestic, about matters ephemeral, but combined with the moving image glee that experimental practice affords.

It’s the kind of thing I’d done with my previous two pieces for Tintype gallery (‘gadabout’ and ‘a celebration of sides’) – but this time rather than referring to specific subjects outside myself (pigeons, Essex Road + postcards in those instances), to let myself be led by what happened in my life. Or what didn’t. It’s all very well making a factual piece about a historically interesting or socially relevant subject, but how to capture the mundane without it being… dull.

So this is the result, just finished yesterday. Admittedly this isn’t a straight diary, but all facts, events, thoughts and locations are for real. It’s also kind of a road test for a range of strategies and methods, as I’ve every intention of exploring this approach further… 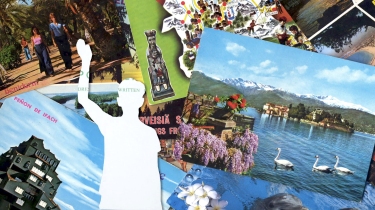 I’m back at TINTYPE gallery again, this time in the group exhibition 1d for Abroad.

My contribution is a short film made especially for the show – ‘a celebration of sides’ – a perky 4 minute consideration (made up) of a whole lot of postcards.

The show runs from March 7th to April 6th. 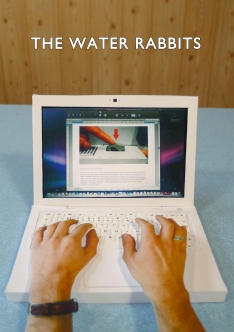 ‘The Water Rabbits’ is now available. Featuring fourteen short pieces – mostly at the experimental end of the fiction spectrum – written by me over the past three years.

So, if you’ve enjoyed any of my moving image work then there’s a strong likelihood that this will appeal i.e. it’s similar… but still (and on paper). None of the material is related to my films or performance pieces – it’s all new – so if you’ve never seen any films by me that’s not going to be a problem either!

Further details, including where to get it plus three complete sample pieces, are just over the page HERE.

I’ve a new short film, commissioned by TINTYPE gallery, appearing in their latest show. My piece is entitled ‘gadabout (guided by pigeons)’. What’s an Essex Road themed film? I’m not sure what the other makers made of this but here’s how they explain mine in the press release:

And that sounds about right.

The show runs from December 8th to January 13th.

**UPDATE: as the show’s now over you can see this piece online here** 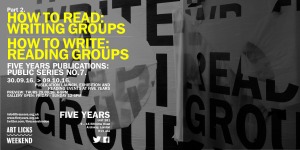 I’ve a chapter in Five Years Gallery’s latest publication HOW TO READ: WRITING GROUPS. HOW TO WRITE: READING GROUPS. : my contribution consisting of pictures, words, a short intro piece, edited highlights of an Amazon review, and a 7 page verse – so quite a mix! This is a spin off from the ‘Unsolicited Literature’ session I ran as part of Five Years’ reading group themed events last year.

Ulp. Time to update this page. This is meant to be a window on to my world of making, but lately it’s become a somewhat neglected one – dusty, even… Not due to creative inactivity – far from it! – but because once one project’s over I tend to roll immediately on to the next and forget to promote what’s just happened (on this site, at least).

So, here’s the latest:

All new video ‘SKIPPER (mistic speech)’ is showing at the excellent ANTIMATTER next month. It’s 12.5 mins long and a lot less concerned with narrative than much of my work. But it’s a friendly piece  – maybe the video cousin of ‘We Are Time’?
Description: Circles, holes, cats, ribbons, ducks, flat furniture and moth. Experimental and domestic, no story but much glee.

(At the time of writing this I’ve also just completed a speakable text to incorporate into a ‘live’ showing of the film. I’m not too sure whether this is necessary – in its current standalone form it plays just fine – but I’m kind of interested in experimenting with how/whether another permutation could work. This feeling may pass.)

The past few months I’ve also been completing a new collection of writing – ‘The Water Rabbits’ – which hopefully will be manifesting soon.
In the meantime four of the shorter pieces have recently been published elsewhere, namely in The Wrong Quarterly, Leopardskin and Limes, decomP magazinE, and Ink, Sweat and Tears.

Two new moving image pieces just finished this week: one on video, the other celluloid.
‘The Riddle (ghost chair)’  is a single screen video, a multi stranded narrative that’s very loosely based on the beginning of a Brothers Grimm story, but quickly runs into a range of other concerns, stories and formal escapades. It’s fun, intense and – it’s worth stressing – experimental.

‘Kodachrome 40,50,60… go’ is a Super 8 and tape-slide performance piece, mixing in a big edit of home movies (found + personal) plus a cache of 35mm slides from far afield. This grab bag of pastness is stitched together into a two-screen, live voiced performance piece eschewing all but analogue technologies.

Images and a little more about each are in the MOST RECENT WORK page here. ‘Kodachrome 40, 50, 60… go’ will be premiering at another Dark Horse Moving Picture show, happening with those fine Reactor Halls people in Nottingham on Saturday 24th May. 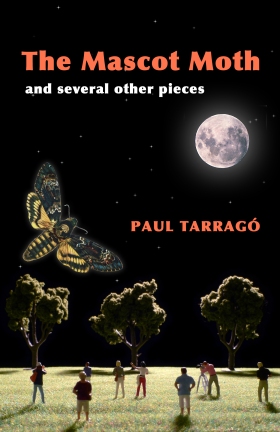 All new and out now ‘The Mascot Moth and several other pieces’ – my first collection of (mostly) fiction. A book! So no moving images, woodland creatures* or quests for meaning to be witnessed in darkened rooms. This is for the light…
I’ve been writing for quite some time – on, off, on – and recently this has slid to the fore. Like my filmmaking it’s an independent endeavour, which has many positive aspects but instant visibility isn’t one of them; so I’m going to be endeavouring to raise consciousness about this over the coming months. This will almost certainly be a s-l-o-w process, but one I’m approaching with a fair amount of glee. And there are a whole lot of new pieces (films + words) to be working on in the meantime…

Further details, some preview pieces, and the all important where-to-get-it here.

*I’ve since remembered that some hedgehogs do appear in one of the stories.

The Dark Horse Moving Picture Show is a Film and Live Performance event by Jennet Thomas and Paul Tarragó featuring special guest Leo Chadburn (a.k.a. Simon Bookish). It will premiere brand new Film/Performance/Music works by all three artists, as well as explore work from their extensive back catalogues of films and songs. This rich and strange cocktail of aesthetic pleasures, urgent ideas and cerebral experimentations will explore new hybrid territories that include a Mystery Event, plus Quiz with Prizes …

EVEN NewER in print

For the past few months I’ve also been beavering away pretty intently with  words and – come April time – will be revealing/releasing a book: ‘The Mascot Moth and several other pieces’. This is a collection of eighteen pieces of writing – mostly fiction (and no scripts). Images, extracts, where to get it etc. will be forthcoming then. 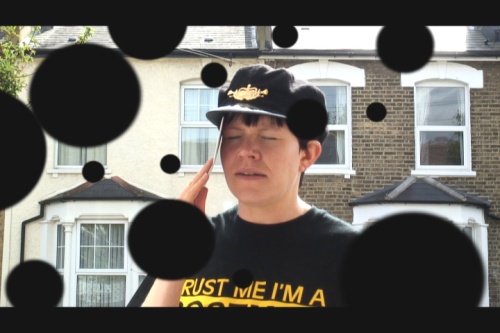 I was cheered to hear that ‘The SEVEN Wonders’ – the latest in the Badger series –  was an award winner at FLEX 2013 last week. This has jolted me into mentioning a couple of forthcoming screenings for it:

April 5th it has its UK premiere in a very special show Jennet and I organising at the Horse Hospital. Full details (and a trailer) to follow very SOON.

A new piece of writing by me appears in Five Years Gallery’s latest publication This Is Not A School. Book.
It’s a spin off from the event described below, and my submission/entry/chapter is a kind of documentary and fiction hybrid – with several pictures included! The book can be ordered from (or viewed for free on) Five Years’ site.

For convenience sake, and as a taster, a pdf of my piece can be downloaded here.

: The Fun of Failure 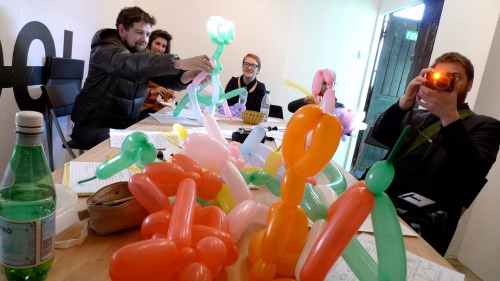 As part of Five Years’ programme of participatory activities responding to the phenomenon of the ‘alternative education project’ I ran a session combining balloon folding activity with round-table seminar discussion on the notion of ‘falling short’. Lively documentation and further details available here. 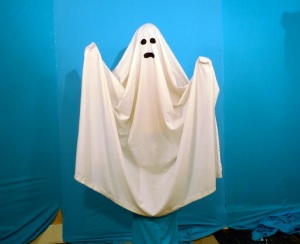 I’m currently filming the latest episode in the Badger series, entitled ‘The Seven Wonders’ (this is a production still so the blue screen and skirting board won’t be visible in the finished piece). Once complete the episode should last 15-18mins and be free-standing i.e. a self contained narrative, although I’ve been working on some installation ideas along the way …

Themes? Living in the culture of the copy; originality and ownership; inexplicable illness; life on other planets. And wonder, times seven. Filming will carry on into late 2011 but the aim is to complete it before the year is out.

Before then I shall complete this piece which has been happening in the background for the past few months. It’s been a kind of  ‘corrective’ side project, shot on Super 8. For 10 years of my filmmaking this was the gauge that I shot everything on – so a return to it felt overdue. Its finished form shall be as a projected 16mm print, with vinyl record backing audio, performed with live voice over. The film’s shot, the edit worked out, and the audio has been track laid; even the voice over has been written. So what’s left to do? The optical printing which I have sworn to do in the coming month, and which I’ve crowded out with other tasks throughout the Summer. But those tasks are largely done now, and optical printing is fun … possibly.

The finished film with live soundtrack will last 11 mins and form a companion piece to another series (non Badger related). The beginnings of an explanation towards this can be found here.